Training in the context of Tibetan Monastic Universities
* 1980 study of Buddhist philosophy and Tibetan colloquial language at the Library of Tibetan Works & Archives, Dharamsala, India
* 1980 to 2001 study of Tibetan dialectic and debate according to the monastic texts of Seraje with Geshe Thubten Ngawang, Tibetan Center Hamburg
* 1981 to 1991 study with Geshe Thubten Ngawang and self-instruction of Vinaya literature; Head of the Vinaya research project of the Foundation for Tibetan Buddhist Studies and Sakyadhita International. Publication: Tsedroen, Bhiksuni Jampa (Carola Roloff): A Brief Survey of the Vinaya. (Vinaya Research I) Hamburg: dharma edition 1992
* 1988 to 1996 study of the doxographic traditions of Tibet with Geshe Thubten Ngawang, Tibetan Center Hamburg

Occupation and Honorary Activities as Buddhist nun
* 1981 to 1998: Management, Direction of several projects and Executive Committee work at Tibetan Center Hamburg
* 1984 to 1988: Member of the board of the German Buddhist Union and the Buddhist Religious Community Germany
* 1986 to today: Lecturer on Buddhism and Tibet: Lectures, courses and seminars in Germany and abroad
* 1987 to 1995: Executive Member of Sakyadhita, International Buddhist Women's Organization (National Representative and Vice President 1991-95)
* 1987 to today: Translation of seminars, consulting discussions, public lectures etc. from the Tibetan
* 1988 to today: Teacher and Translator in the context of the Systematic Study of Buddhism (7-year-study-course) at Tibetan Center Hamburg
* 1996 to 2006: Co-Lecturer in the Training course for further study “Buddhism in History and Presence“ at the University of Hamburg
* 2003: Acquisition of the title „Magistra Artium“ at the University of Hamburg (Tibetology)
* 2003 to today: Ph.D. Student at the University of Hamburg (Tibetology)
* 2005: Member of the Committee of Western Bhikshunis
* 2006: Member of the Bhikkhuni Research Committee of the Department of Religion and Culture of the Tibetan Government in Exile
* 2006/2007: Research Scholar at the Central Institute of Higher Tibetan Studies in Sarnath-Varanasi (3 months) 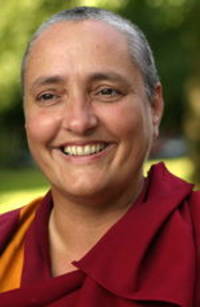