Abstract: A Flawless Ordination: Some Narratives of Nuns' Ordinations in the Mūlasarvāstivādavinaya

In exploring the possibilities for full ordination for women in the Tibetan monastic lineage, a great deal of attention has been given to ritual texts and commentarial passages concerned with ordination procedures. Yet the Mūlasarvāstivādavinaya, the root textual corpus that ostensibly grounds all ordination rules and practices in the Tibetan tradition, has received far less attention.

The vinaya itself contains narratives depicting nuns' ordinations that give a richer and more complex sense of what was involved in admitting individual women to the nuns' order than emerges from the derivative procedural literature. By offering a context for the ordination practices that the Buddha authorized within his lifetime, study of these narratives
can serve as a rich resource for the discussion of reinstating full nuns' ordination in the very different social context of today.

This paper will look at narratives of nuns' ordination within the
Mūlasarvāstivādavinaya, taken from the Sanskrit and Tibetan editions. Within one such narrative, the Buddha urges particular care in making the ordination a 'flawless' or 'perfect' one, apparently in  anticipation of social resistance to that ordination.

With its concern to overcome social objections, this narrative may be particularly relevant for nuns today working for full ordination in the face of other forms of resistance. It is especially striking that in this instance, the aspects of the ordination process that the Buddha directs attention to are very different from the aspects of ordination that have gained the most attention today. 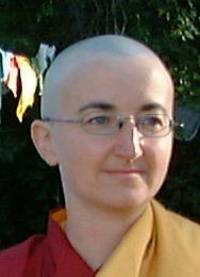 Damchö Diana Finnegan (aka Ven. Lhundup Damchö) is a PhD candidate and Fulbright scholar doing her dissertation research on social relations as depicted in the narratives of the Vinayavastu, a foundational text for the Mūlasarvastivāda lineage that is followed by Tibetan monastics. She was ordained as a shramanerikā in 1999 by Geshe Lhundub Sopa, a highly respected scholar and monk in the Tibetan monastic tradition.

Born in New York, she is now a doctoral candidate at the University of Wisconsin-Madison, working in Sanskrit and Tibetan. After graduate studies in Greek philosophy in her early twenties, she worked for seven years as a journalist in New York and Hong Kong before committing herself to a Buddhist path.