Abstract: Key Issues Related to the Establishment of Restoration of Bhikkuni Lineage in Bangladesh Therabada Buddhist Tradition, where it Doesn´t Currently Exist

There is controversy on the issue of Attha Garu Dhamma, the eight terms and conditions that laid down by the Buddha for the full ordination of women in the Buddhas’s order. In Mahaparinibbana Sutta of Pali Suttanta Pitaka stanza No. 44 of Tatiya Bhanavara, we see that just after the enlightenment of the Bhuddha sitting at the root of Ajapala Tree Bhuddha himself was planning about the establishment of Bhikkhuni Sangha, saying thus ---

With the reference of these sayings of the Buddha we could omit the other writings of the Text on rejection for the establishment of Bhikkhuni Sangha, that we see in Bhikkhuni Khanda of cula vagga of vinayapitaka. But about Attha Garudhamma, there are something to be discussion for understanding the reality of human nature between male and female.

Brahmacariya (total rejection of sex conduct) is a common issue in mank-hood, and in nun-hood. Close-living of male and female encourage the mind to develop sexual feeling to each other by nature. The Buddha said, “Ma te rucci matugamassa. Tathagata appavedite dhamma vinaye agarasma anagariyam pabbajjasanti.” O monk ! You should never like to ordain women in the order if you like to enjoy a pure recluse life in Buddha Sasna. Living together with male and female will cause to spoil the Buddha sasna.

However in other philosophical schools like Titthika paribrajika too had the system of woman ordination in the time of the Buddha. And there was easy to interchange among the schools too. Kundola kesi and Bhadda Kapilani had that opportunity to change their school from Titthika Pribrajika into Bhikkhuni order. In most of the Jataka, tales and in the Buddha vangsa of Pali Text we see the existence of Bhikkhuni Sangha too.

Bangladesh was part of India till 1947. Historical and archeological evidence are lot of the ancient Buddhism in Bengal. But among the historians opinion differs about the root and development of Buddhism on the soil of Bangladesh. Thera vangisa was one of the eighty great disciples of Buddha during His time. Some scholars demand him a son of Bengal. In mahanipata of Theri Gatha (the songs of the great Bhikkhunies) Theri Sumedha was also expected as the daughter of Bengal during Buddha’s time. Rock scripts (3rd B.C.) of the great emperor Asoka were also found in Pundravardhan of North Bengal. The great Chinese student and pilgrimage of the 7th and 8th centuries Hiu-en-Tsun and Fa-Hien noted also a lot about the practice of Buddhism in Bengal. Venerable Atisha Dipankara the golden son of Bengal was established Vajarayana Buddhism in Tibbat also. The world famous Nalanda, Bikram Sila, Sompuri and Pandita Vihara the university type of institutions were developed in Bengal from the 8th to 11th century with hundreds of years supports from the Buddhist Kings and emperors.

But what was happened in the rise and development of Bhikkhuni Sangha in that period of Buddhism in Bangladesh ? In the history of Buddhism we could see no important role of Bhikkhuni Sangha in that period. No Text has been found that was written by any Bhikkhuni, or there was not a single Bhikkhuni like Sangha Mitra, the daughter of emperor Ashuka, except Bhikkhuni Bhava Bhuti, the sister of the King of Urissa (9th century A.D.) who was famous for her super natural power. The existence of Bhikkhuni Sangha continued till 12th century on the soil of Bengal. But what they did no body knows. In the 12th century Brahmin Kings of Sen-dynasty did not support Buddhism except Brahminism and from the 13th century to 16th century Bengal was rule by the Muslim rulers. At the end of that period we could see a very few Buddhists are existing in the North Eastern corner of India Sub-continent, the Chittagong and Chittagong Hill Tracts. From 17th century to 19th century the whole part of India Sub-continent was ruled by the British Colonial Govt. In that period 1864 a famous leading monk of Arakan Dynasty reestablished Thera vada Buddhism in the Vajarayana Buddhist society of Chittagong and Chittagong Hill Tracts.

From then after now the whole Buddhist of Bangladesh are in practice of Thera vada Buddhism and culture influenced by the Myanmar, Sri Lanka and Thai Buddhists. A very few women are practicing the Eight precepts in different temples. But no existence of Bhikkhuni in the Buddhist society of Bangladesh till now. The increasing amount of youth women looking for a way of serious practice in the Sangha must consider very careful before the choose for full ordination as Bhikkhunis.

In Bangladesh, there are about one million Buddhist, which are less than 1% of the total population with about 90% Muslim. In the past Indian and Bengali Muslims and Hindus were liberal to some extend due to the influence of Buddhist culture and philosophy for a few thousand years. Peaceful co-existence were admirable and that time. The Pala dynasty was called the golden age of Bengal as the historian says due to over flowed by the Buddhist culture and philosophy throughout the Bengal for four hundred years of Pala dynasty. But now the growing population, political unrest and fundamentalism among the religious peoples making the situation cloudy day by day and this situation is not much favourable to establish Bhikkhuni Sangha in this soil of Bengal. Furthermore, not many leading monks will stimulate females to take Bhikkhuni ordination.

Venerable Bana Vhante Sadhananda Mahathero will give women higher ordination, but only after they studied the way of practice as it is described in Bhikkhuni Khandaka from Mahabagga, Bhikkhuni Bivhanga and Bhikkhuni Pati Mokkha all texts from Pali Vinaya Pitaka those are translated by me in Bengali and published by Raj Bana Vihar for free distribution. In addition, should they have proper understanding about present developments of social, political and economical situation ? In future I would explain the whole real situation of present in Bangladesh. 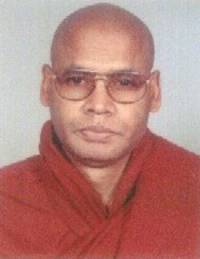 He was born in the year 1950 in village Jobara, Hathazari, Chittagong, Bangladesh.

He obtained B.A.(Hons.) M.A. in Bengali Literature and M.A. in Pali-Literature from the University of Chittagong, Bangladesh. He received training from Maharagama SiriVajirayyana Bhikkhu Training Center, Colombo, Srilanka.

He was a Professor of Bengali Literarure in Hamidiya Degree Madrasa, Kadalpur, Raozan, and teacher of Pali Language, in Rajvana Vihara Pali College, Rangamati, and Secretary General of Bangladesh Sangharai Bhikkhu Mahasbha, The Supreme Sangha Council of Bangladesh.

He is a writer of six (6) books on Buddhism and translator of nine (9) books of Pali Tipitaka.

He is a founder of NGO’s Like Mahamandal Welfare Organization (MWO), Bangladesh; Saran; and Pragysbansa-Gyanaratna Foundation Trust.