Abstract: The Unbroken Lineage of the Sinhalese Bhikkhuni Sangha from 3rd century B.C. to the 11th century

The Dipavamsa gives detailed information on the continuation of the lineage introduced by Sanghamitta, not only in the capital of Anuradhapura, but also of its spread to other parts of the country. Bhikkhunis who had excelled in different parts of the canon with the study of Vinaya given the highest place, as well as those who had attained special skills during different periods of time are described in detail.

There is evidence to prove that the Bhikkhuni lineage that was inherited from Sanghamitta continued in Sri Lanka through the centuries. There is also evidence for the existence of an unbroken succession of teachers of the Vinaya among the Bhikkhunis coming down from the time of Saghamitta. The original interpretation of the Vinaya for Bhikkhunis is retained in the Cullavagga in the Vinaya Pitaka, the earliest section of the Buddhist canon. There is also evidence to show that the succession of teachers among Bhikkhunis had no links with the line of teachers among monks as given in the Samantapasadika, a commentary on the Vinaya Pitaka written in Sri Lanka in the 5th century by Buddhaghosa, a monk from South India. The line of teachers and the interpretation of the Vinaya as contained in the Samantapasadika is a modified code of conduct for monks, developed by the commentators.

It was this unbroken lineage that was passed on by the Sri Lankan Bhikkhunis headed by Devasara when they conferred higher ordination to more than 300 Chinese nuns in Nanjing in 433 A.C. who had by then, received ordination only from monks. 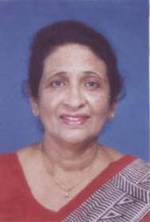 Hema Goonatilake received her PhD from the School of Oriental and African Studies, University of London. She was a senior faculty member at the University of Kelaniya, Sri Lanka until 1989 when she joined the United Nations, New York and Phnom Penh, Cambodia as a gender expert. Subsequently she served as the Country Director of the Heinrich Boell Foundation in Cambodia and as Senior Advisor to the Government of Cambodia in university education and Buddhist affairs. She was honoured with the title ‘Sahamitra’ for the service she rendered in Cambodia.

She pioneered the campaign for the re-establishment of the Bhikkhuni order in Sri Lanka in the early 1980s after completing a study of participatory observation of the Bhikkhunis in China, Taiwan, Korea, Hong Kong and Japan. She gives lectures in Theravada Buddhism around the globe.

Currently she is the President of the Buddhist Resource Centre, Sri Lanka and the Hony. Secretary of Red Lotus, an international Buddhist humanitarian agency, paralleling the Red Cross and Red Crescent.