Abstract: The First Bhiksuni Ordination in East Asia – Giving Birth to a New Way of Life

In 434 CE, two groups of Buddhist nuns from Sri Lanka presided over the first Bhiksuni ordination in East Asia in the ancient Chinese capital of Nanjing.  Sponsored by King Mahanama of Sri Lanka, Tessara and her nineteen sisters traveled over the high seas and gained access to the highest realms of Chinese society.  Monk Gunavarman, their Acarya, was on personal terms with the Chinese emperor, and Sanghavarman, their Ordination Master, would lead the foreign and Chinese members of the Sangha to use the newly translated text of the Bhiksuni Vinaya to ordain 300 Chinese women.  Many of these Chinese Bhiksunis would also go on to become not just spiritual leaders of their generation, but also would go on serve as advisors to the emperor and the royal family.

A close examination of period documents reveals that Hui Guo and her Chinese sisters were already acutely aware of the challenges they would face should they persist in their goal of ordination by both assemblies of monks and nuns.  Applying the Buddhist concepts of intention, word, and deed, I shall describe how the Grand Ordination was undertaken.  I also shall seek to demonstrate that the basic constituents necessary for the transmission of the Buddhist lineage were all present.

I shall use the accounts of the period to reveal the unfolding of this great event.  These will include the Biqiuni Zhuan or Lives of the Nuns written by Hui Jiao in roughly 516; Gao Seng Zhuan or Lives of Eminent Monks written by Bao Chang a few years earlier; the Mahavamasa and Dipavamsa historical chronicles of Sri Lanka; and, the Jin Dynasty dynastic history.  I will contrast the documentation regarding the Bhiksuni ordination with what is known regarding the ordination of the first Bhiksus in China.  Then relying on the great histories of early Buddhism in China by Zurcher and Tsukamoto, I hope to demonstrate that the Grand Ordination in Nanjing not only made possible the successful transmission of Buddhist cultivation from South Asia to East Asia, but also that the ordination of women made it possible for the Chinese to embrace Buddhism wholeheartedly and move it from the periphery of Chinese intellectual life to the center of Chinese social values. 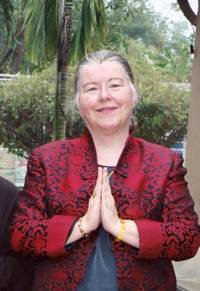 Roseanne Freese joined the U.S. Department of Agriculture Foreign Agricultural Service (FAS) as an economist in 1991 and now conducts work supporting U.S. negotiations in the World Trade Organization.  During her 15 years with FAS, she has served as an agricultural attaché in Beijing and has worked with the Governments of India, Russia and Vietnam regarding technical assistance needs in the area of food safety.

She received a Bachelor of Arts Degree in Asian Studies from the University of California at Berkeley; pursued advanced studies in Chinese Philosophy at National Taiwan University; received a Master’s Degree in International Relations and Trade at the Johns Hopkins School of Advanced International Studies; and, studied China’s economic reforms at Nanjing University while on a Johns Hopkins graduate fellowship.

In addition to over 100 articles and presentations in the field of trade and economics, she is an avid historian of early Buddhism.  Her work has included presentations to Sakyadhita – Daughters of the Buddha – International and the American Academy of Religion and a number of articles and technical translations for U.S. journals and Chinese viharas.

She is now nearing completion of her book, The Blooming of the Lotus – The World’s First Diplomatic Mission by Women.  The work explores the political, economic, and social events that preceded and followed the fifth-century journey made by Tessara and her Dharma Sisters from the royal court of Sri Lanka to the imperial capital of China to establish for the first time in East Asia a Buddhist Monastic Order for Nuns.