Abstract: The Need to look at the popular interpretations of the Tripitaka (Theravada context)

In this paper the author attempts to reread various passages from the Tripitaka which seems to have worked against the reintroduction of the bhikkhuni ordination in contemporary Buddhism. The paper will take up the meaning of being Theravada and how serious are the Theravadins in the present day to follow the spirit of Theravada.

The obstacles to ordination of bhikkhunis are mostly cultural and patriarchal, Reading  between the lines of the text, what is the true message of the Buddha. Before the Buddha passed away he suggested that we take both Dharma and Vinaya as our guideline. But the problems regarding ordination issue, it seems that the sangha tend to insist on the vinaya and also the words of the Vinaya not the spirit.  The vinaya will be guided best when its coupled with Dharma. 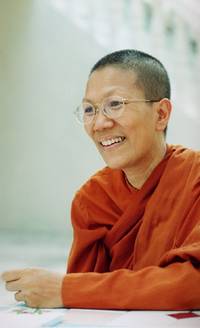 In 2001 She received ordination in Sri Lanka in 2001. Now abbot of Songdhammakalyani Monastery, the only monastery for bhikkhunis in Thailand. She is also the first Theravada bhikkhuni in Thailand.