Proponents as well as opponents of the re-establishment of the Buddhist nuns’ order in the Theravada tradition repeatedly refer to the legend of the establishment of the Bhikkhunisamgha as given in the Pali Vinaya-Pitaka. Both do so with good reason, for the events depicted there give no consistent picture of the events that led to the Buddha’s consent to ordaining women as Bhikkhunis. In this paper will be demonstrated, on the basis of internal evidence, that diverse and at times even conflicting agenda are voiced in this canonical account. 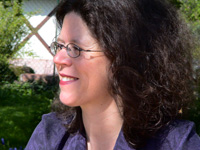 Ute Hüsken (born 1965) studied Indology (Buddhist studies) under Prof. Heinz Bechert in Göttingen (Germany). Her dissertation deals with the disciplinary code for Theravāda Buddhist nuns. For her Habilitation “On the transitional rites of the Vaikhānasas” (concluded 2002) she went to Heidelberg University (Prof. Axel Michaels).

Currently she is head of the project "Initiation, priestly ordination, temple festivals – ritual traditions in the south Indian temple city of Kancipuram" and member of the executive committee of the Collaborative Research Centre "Dynamics of Ritual" at Heidelberg University. In October 2007 she joins the University of Oslo (Norway) as Professor for Sanskrit.