Abstract: How Ordination Relates to Status in the Buddhist Himalaya

Let us consider the complex set of factors, including ordination, that have and continue to constrain the position of female monastics in the rural Himalayan regions of Zangskar and Ladakh.

We begin with a brief overview of the evidence for fully ordained nuns in Buddhist Kashmir and western Tibet up to and beyond the 10th and 11th century  CE.  The same factors that presumably led to the decline and eventual disappearance of fully ordained nuns in this region continue to play salient roles today.  Then as now, economics and environment played a crucial role in the maintenance of a monastic tradition and the requisite ordination of nuns.  The history of nuns and monks has been profoundly shaped by these and other factors for at least a millennium.

Today more than ever, rapid changes in education and globalization are rapidly breaking down existing dualities---such as rural/urban, east/west, and monastic/lay, and male/female---that have traditionally constrained opportunities available to nuns in the Tibetan tradition.  An exciting new set of institutions has been created from the ground up in Ladakh and Zangskar to promote the status and welfare of nuns in the region.  Institutions like the Ladakh Nuns Association and the more recently formed Zangskar Nuns Association are trying to rethink the role of nuns as well as religion in their local society.  What can the recent advances and ongoing difficulties faced by these institutions tell us about current prospect and ongoing position of nuns in the Indian Himalayas?  It is only when we understand the practical challenges of reinventing the role of Buddhist nun that we see the way forward out of historic limitations.

Kim Gutschow is Visiting Assistant Professor at Williams College in the United States, while Skalzang Lhamo is a nun from Kachod Grubling Nunnery in Karsha, Zangskar as well as the secretary of the Zangskar Nuns’ Association. 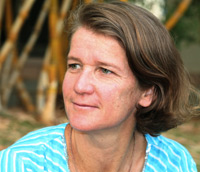 Kim Gutschow is  a professor of religion and anthropology at Williams College in Williamstown, Massachussetts, USA.  Professor Gutschow's award-winning book, Being A Buddhist Nun (Harvard University Press, 2004) won the Sharon Stephens Prize for best contemporary ethnography in 2005 and was based on Gutschow's experiences living in a Tibetan Buddhist nunnery in the Indian Himalayan region of Zangskar.  Gutschow spent nearly four years living in the clifftop nunnery, including three winters where she was completely cut off from the outside world.  Gutschow also served as anthropologist and assistant script writer for the documentary film, Behind the Ice Wall, which won grand jury prizes at both the Bannf and Telluride Mountain Film Festivals in 1995. 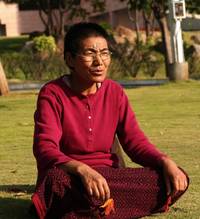 Skalzang Lhamo is the current president of the Zangskar Nuns Association, an Indian NGO that works to improve the welfare and education of nuns in Zangskar, in collaboration with a Canadian NGO, Gaden Relief Projects.  She is a resident of Karsha, Zangskar, where she was first tonsured and ordained as a Tibetan Buddhist nun (Gelugs pa sect) in 1972.  She has served as a key Zangskari liason for Gaden Relief's Zangskar Project since 1991.