One of the central questions in the revival of the bhikkhuni lineage from the Theravādin perspective is the validity of ordination lineages in other schools. The traditional Theravādin view would have it that the bhikkhunis in existence today are ‘Mahāyāna’. Mahāyāna is believed to have descended from the Mahāsaṅghika school. According to the earliest Sri Lankan chronicle, the Dīpavaṁsa, the Mahāsaṅghikas are none other than the ‘evil’ Vajjiputtakas, who advocated the use of money by monks, and who were defeated at the Second Council, but who later reformed and made a new recitation. Hence the Mahāyāna is representative of a tradition whose fundamental principle was laxity in Vinaya. The Dīpavaṁsa states that the other 17 schools apart from the Theravāda are schismatic and ‘thorns’ in the sāsana. It is therefore impossible to accept them as part of the same communion.

But the reality is that there has never been a distinctively ‘Mahāyāna’ Vinaya or ordination lineage. Rather, some bhikkhus and bhikkhunis, having ordained in one of the lineages of the early schools, choose to study and practice certain texts and ethical ideals known as ‘Mahāyāna’. The bhikkhus and bhikkhunis of the East Asian traditions follow the Vinaya of the Dharmaguptaka school, while the Central Asian traditions follow the Mūlasarvāstivāda. If we wish to understand the relationship between the existing Sanghas of the various schools, then we must investigate the relationships between the early schools of Buddhism from whom the Vinayas and ordination lineages derive.

One way of doing this is to examine the origins of the schools in question. Here we enter into the swirling and uncertain world of mythology, where interpretation is all, and sectarian bias is not merely expected, but is the driving motivation. Given the contradictory, incomplete, and doubtful nature of the literary sources it is unclear whether we can expect to find even a glimmer of truth. But our surest evidence derives from the happy coincidence of the historical/mythic accounts and archaeological findings, and it is here that we begin our search.
One of the fullest accounts of the origination of any school is found in the Sinhalese Vinaya Commentary, which exists in a Pali version the Samantapāsādikā, and an ancient Chinese translation the Sudassanavinayavibhāsā (善見律毘婆沙Shan-Jian-Lu-Pi-Po-Sha, T 1462). This recounts several decisive events that took place in the time of Aśoka. There was a conflict in the Sangha that was resolved by the expulsion of the corrupt monks by Aśoka together with the Elder Moggaliputtatissa, following which the ‘Third Council’ was held to reaffirm communal identity. Subsequently Moggaliputtatissa organized the sending out of ‘missionaries’ to various parts of India, an event that has often been compared with Aśoka’s sending out of Dhamma-ministers. The main purpose of this narrative is to establish the credentials of the Sinhalese school, which we know of as Theravāda, but which I will refer to by the more precise and historically accurate term, the Mahāvihāravāsins. This was established by Aśoka’s son Mahinda and his daughter Saṅghamittā.

There are two major pieces of inscriptional evidence that derive from the early period of Indian Buddhism: the Aśokan edicts and the reliquaries at Vedisa. Strikingly, both of these confirm the evidence found in the Sinhalese Vinaya Commentary. The Vedisa inscriptions mention the names of several monks who the Sinhalese Vinaya Commentary says were sent as missionaries to the Himalaya soon after the ‘Third Council’. And Aśoka’s so-called ‘schism edicts’ (which actually state that the Sangha is unified, not schismatic!) mention an expulsion of corrupt bhikkhus, which many scholars have identified with the events prior to the ‘Third Council’. In addition, the Sinhalese archaeological record, while not as decisive, tends to support the general validity of the missions account. This correspondence between epigraphic and textual evidence encourages us to take the missions account of the Sinhalese Vinaya Commentary seriously.

In the current context, it is worth recalling the mission of Soṇa and Uttara to Suvaṇṇabhūmi. This is believed by Burmese to refer to Burma, and Thais to refer to Thailand, while scholarly opinion lacks such reassuring certainty. This mission, which to this day forms a crucial narrative of self-identity for Buddhists in these regions, was said to result in the ordination of 1500 women. Thus bhikkhuni ordination is intrinsic to South-east Asian Buddhism from the beginning.

One of the major missionaries was Yonaka Dhammarakkhita. He was, as his name indicates, a Greek monk, native of ‘Alasanda’ (Alexandria). He features in the Pali tradition as a master of psychic powers as well as an expert on Abhidhamma. He went to the Greek-occupied areas in the west of India. Long ago Przyluski, followed by Frauwallner, suggested that Dhammarakkhita be identified with the founder of the Dharmaguptaka school, since dhammarakkhita and dhammagutta have identical meaning. Since that time two pieces of evidence have come to light that make this suggestion highly plausible. One is the positive identification of very early manuscripts belonging to the Dharmaguptakas in the Gandhāra region, exactly where we expect to find Yonaka Dhammarakkhita. The second is that the phonetic rendering of his name in the Sudassanavinayavibhāsā evidently renders ‘Dharmagutta’ rather than ‘Dhammarakkhita’. We also note that several texts say that the Dharmaguptaka was founded by a certain ‘Moggallāna’. While this is traditionally identified with the great disciple of that name, I think it is more likely a reference to Moggaliputtatissa, the patriarch of the Third Council, who is also regarded by the Mahāvihāravāsins as their founder. We are thus perfectly justified as seeing the Mahāvihāravāsins and the Dharmaguptakas, not as warring schismatic parties, but as long-lost brothers parted only by the accidents of history and the tyranny of distance.

With regard to the third of our schools, the Mūlasarvāstivādins, the history is even murkier. In my opinion the most persuasive theory for the origin of this school was again provided by Frauwallner, who argued that they were originally based in Mathura. This would align this school closely with the famous arahants of Mathura, Śāṇavāsin and Upagupta. Śāṇavāsin features in all the schools as a revered Elder and Vinaya master in the Vinaya accounts of the Second Council. He is said to have established a major forest monastery, which is called Urumuṇḍa in the northern sources and Ahogaṅga in the Pali. Later on, it was this very monastery that Moggaliputtatissa resorted to for retreat. The spiritual power Moggaliputtatissa derived from his time in Śāṇavāsin’s forest monastery was decisive in convincing Aśoka to entrust him with the task of purifying the Saṅgha and organizing the missions. Thus the establishment of the Mahāvihāravāsins and Dharmaguptakas is closely associated with the Śāṇavāsin lineage. It is even possible that Soṇaka, the preceptor of Moggaliputtatissa’s preceptor, is simply a misspelling for Śāṇaka (-vāsin), in which case the Mahāvihāravāsin ordination lineage would be directly descended from Śāṇavāsin and the forest tradition of Mathura.

Finally, it should be remembered that one of the other missionaries was Majjhantika, Mahinda’s ordination teacher, who went to Kaśmir and established the school later known as the Sarvāstivāda. This account agrees with the versions of the northern schools (except they generally place the date earlier). It is a point of contention whether this school has any connection as a Vinaya lineage with the Mūlsarvāstivāda, or whether they simply share some similar doctrines. In any case, this school is seen as having emerged from geographical dispersion, rather than schism. The northern accounts are contradictory in this respect, and some of them do associate the Kaśmir school with schism; but these late and fantastic accounts in any case depict a schism from the Mahāsaṅghika, which would place them on the side of the Mahāvihāra/Dharmaguptaka.

The topics discussed in this abstract are treated in full detail in Bhikkhu Sujato’s book Sects & Sectarianism. For information, see: sectsandsectarianism.googlepages.com 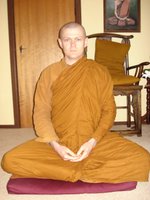 Bhikkhu Sujato is an Australian monk who received full ordination in Thailand in 1994. He is the abbot of Santi Forest Monastery near Sydney, Australia and is the secretary of the Australian Sangha Association. He is actively involved in helping establish the bhikkhuni lineage within the Forest Tradition.