When I took sramanerika ordination in Dharamsala, India, in 1977, I heard the story behind the blue cord on our monastic vest (dongka): it was a sign of appreciation for the two Chinese monks who aided the Tibetans in reestablishing the ordination lineage when it was on the verge of extinction in Tibet. “Full ordination is so precious,” my teachers instructed, “that we should feel grateful to all those in the past and present who preserved the lineage, enabling us to receive the vow today.” Interestingly, thirty years later, I am returning to this story of the re-establishment of the bhikshu sangha in Tibet with Lachen Gonpa Rabsel’s ordination to show how it is a precedent of multi-tradition ordination that could be used to establish the bhikshuni ordination in Tibetan Buddhism.

At least five bhikshus are required to give full bhikshu ordination (upasampada). After the persecution of Buddhism by the Tibetan king Langdarma in the ninth (or possibly tenth) century, three Tibetan bhikshus requested the aid of two Chinese bhikshus in ordaining Lachen Gonpa Rabsel, thus re-establishing the bhikshu ordination in Tibet. This ordination in which Lachen Gonpa Rabsel received the Mulasarvastivadin bhikshu vow was given by a sangha composed of two Vinaya lineages, the three Tibetans being from the Mulasarvastivadin Vinaya lineage and the two Chinese bhikshus being from the Dharmaguptaka Vinaya lineage.

How is it known that the two Chinese monks were from the Dharmaguptaka lineage? The bhikshu ordination had consistently been given according to the Dharmaguptaka rite in China since the third century. Furthermore, in 709, an imperial edict issued by Emperor T'ang Chung Tzung of the T'ang Dynasty decreed that the Dharmaguptaka Vinaya was to be the only Vinaya to be used for both ordination and regulating daily life of monks in China.

Since a historical precedent of multi-traditional ordination exists in Tibetan history, it should be possible for the bhikshuni ordination lineage to be established in Tibetan Buddhism by means of the dual ordination procedure with Mulasarvastivadin bhikshus and Dharmaguptaka bhikshunis. 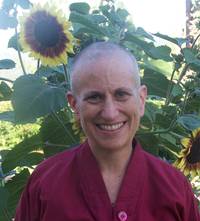 Bhikshuni Thubten Chodron was ordained as a Buddhist nun in the Tibetan tradition in 1977 and received bhikshuni ordination in Taiwan in 1986. She studied and practiced Tibetan Buddhism under the guidance of His Holiness the Dalai Lama, Tsenzhap Serkong Rinpoche, Zopa Rinpoche, and other Tibetan masters for many years in India and Nepal.

She was resident teacher at Amitabha Buddhist Centre in Singapore and at Dharma Friendship Foundation in Seattle and was co-organizer of "Life as a Western Buddhist Nun," an educational program in Bodhgaya in 1996. She is founder and abbess of Sravasti Abbey in Newport, Washington, one of the few Buddhist monasteries in the United States.

Active in interfaith dialogue and prison work, she is also an author and  teaches Buddhist philosophy, psychology, and meditation worldwide. Her books include Open Heart, Clear Mind; Buddhism for Beginners; Working with Anger; Taming the Mind; Cultivating a Compassionate Heart;, and How to Free Your Mind.