Abstract: Experience of being the Tibetan Buddhist Teacher to Convene and Sponsor the First Tibetan Initiated Bhikshuni Ordination Ceremony held in Canberra, Australia in October 2003

Since coming to the West in the early 1980s I have founded fifteen Buddhist centres in Australia and New Zealand.  Over the years an increasing number of my students wished to be ordained as Shramanera and Shramaneris. Some went to Nepal and were ordained as novices and others were ordained in Australia when His Eminence Chogye Trichen Rinpoche visited Australia in 1997 and 2001. By early 2002, a number of Sharamaneris sought my advice on how they could be ordained as Bhikshunis.

I knew that, despite His Holiness the Dalai Lama’s efforts, the Tibetan Buddhist leadership and hierarchy were very resistant to allowing Bhkshuni ordination to take place. They had no wish to recognise existing Bhikshuni ordination lineages, let alone convene or sponsor an ordination ceremony. The Department of Religious Council in Dharamsala is said to have, instead, set up a team of scholars to examine the authenticity of existing Bhikshuni lineages.

Many years have passed and yet every meeting called by the Religious Council attracts more staunch monks whose medieval views only create further obstacles. Consequently, Tibetan Buddhist masters have sent their female students to Taiwan, Korea or China to be ordained as Bhikshunis, since there were none in the Tibetan leadership who were willing to emulate the past great kings of Tibet.  Just as King Trisong Deutsen invited Shantarakshita and others to Tibet in 7th century and had the first seven Tibetans ordained, someone had to create the causes and conditions for Bhkshuni ordination to happen in Australia.

After obtaining blessings from His Eminence Chogye Trichen Rinpoche, I decided to establish a Bhikshuni Ordination Council and invite senior monks and nuns to form a preceptor council. With the help of Ven. Thich Quang Ba, a long time friend and Abbot of the Vietnamese Buddhist temple in Canberra, we convened the Ananda Bhikshuni Ordination Council. We invited some senior Tibetan monks resident in Australia to be part of the Preceptor Council but all refused to attend, citing personal reasons. In the end we had nineteen senior Vietnamese Buddhist Bhikshus and seven Bhikshunis from Australia and abroad, who kindly agreed to officiate at the first Tibetan initiated Bhikshuni Ordination ceremony ever to be convened.  It is now history that under the auspices of Ananda Bhikshuni Ordination Council, nine women (including seven Australian and NZ Tibetan Buddhists) were ordained as Bhikshunis in October 2003 at Shakyamuni Buddhist Centre and Virupa Retreat Centre in Canberra.

I do not know what will be achieved by examining the authenticity of Bhikshuni lineages or by seeking a declaration from His Holiness the Dalai Lama. All I know, from experience, is that you just have to create the causes and conditions for Bhikshuni Ordination to happen.  If thousands of Chinese, Vietnamese, Korean and Japanese Buddhists have been initiated into Vajrayana Buddhist practices without needing to examine the authenticity of the Tibetan Buddhist lineages and without having to make a declaration about a preferred lineage or tradition, why are these procedures necessary for Tibetan Buddhists to be ordained as Bhikshunis from other traditions?

One can only hope that the 1st International Congress on Bhikshuni Vinaya and Ordination Lineages can definitely promote mutual respect and co-operation between various Vinaya traditions and that we learn to respect the traditions that have Bhikshuni lineage and learn to be their disciples without prejudicial views.

The benefit of meeting many of you here at this conference will only encourage me to take a Bhikshuni Preceptor Council to India, convene and sponsor a Bhikshuni ordination ceremony and create an opportunity for Tibetan nuns to seek Bhikshuni ordination.  Anyone who is interested in helping me to do this may contact me. 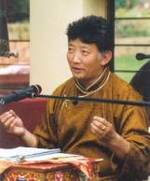 Lama Choedak Rinpoche is the heart son of His Eminence Chogye Trichen Rinpoche as well as being the representative of the Buddha’s compassion in action for his Australian and New Zealand students.

His Eminence bestowed the title “Tsharpa Lochen Lama Thubten Choedak Rinpoche” in 2001 in recognition of Lama Choedak’s work to propagate the Dharma as a teacher, leader, administrator and translator. When bestowing the title, His Eminence said that Lama Choedak’s achievements were equivalent to those of the great Tibetan translators and scholars (Lotsawa Chenpo) of the 11th century.

Born in Tibet, Lama Choedak Rinpoche escaped the Communist Chinese invasion by travelling to Nepal as a refugee with his family when he was only 12. He then spent 12 years undergoing rigorous monastic training under His Eminence Chogye Trichen Rinpoche: three and half of these years were spent in solitary meditation retreat, sponsored by His Holiness the 14th Dalai Lama.

Lama Choedak Rinpoche has been teaching in Australia and New Zealand for more than 22 years and has hundreds of dedicated Dharma students, including 20 ordained Australian Sangha - Shramanera, Shramaneris, Bhikshus and Bhikshunis.  He is the founder and Spiritual Director of Sakya International Buddhist Academy and an ever growing number of Dharma Centres in both countries.  There are currently 15 formal centres and countless informal practice and study groups which have developed purely because of the interest in the Dharma inspired by the dedication, wisdom and realisation which Lama Choedak Rinpoche embodies.