At a conference of sixteen Tibetan Vinaya masters held in May 2006 in Dharamsala, India, three options for the re-establishment of Tibetan Bhiksuni lineage were discussed: (1) ordination by Mulasarvastivadin bhiksus alone; (2) ordination by bhiksus of the Mulasarvastivadin lineage together with bhiksunis of the Dharmagupta lineage; and (3) ordination by bhiksus and bhiksunis of the Dharmagupta lineage. Due to time limitations, the issues involved and possible solutions could not be fully discussed. Re-establishing the bhiksuni lineage in the Tibetan tradition remains an issue of vital concern in international Buddhist circles.

In my paper, I will discuss in detail the merits and demerits of each option. For the first option, I will explain the positions taken in the Vinaya sources and the views of ancient Indian and Chinese Vinaya masters in support of ordination by the Bhiksu Sangha alone. For the second option, I will address the question of whether it is possible and valid to have a bhiksuni ordination by conducted by bhiksus and bhiksunis from two different lineages. For the third option, I will address the question of the validity of the Chinese bhiksuni lineage, the main concern of the Tibetan monks, by explaining how the bhiksuni lineage came into being in China and how it continued uninterruptedly until the present day. 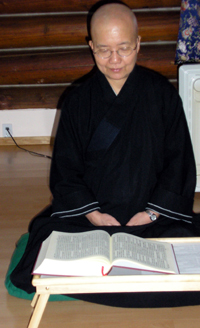 Master Heng-ch’ing, born in 1943, comes from T’ai-nan County in Taiwan.  She graduated from the Department of English of Soochow University  (T’ai-peh, Taiwan) and has a  Master in Pedagogic from the University of Rhode Island (Kingston, USA).  In 1975, she relied on Master Xuanhua for tonsure and became a nun.  Afterwards, she entered the University of Wisconsins (Madison, USA) to study and obtained the doctoral degree with a thesis on “The Ch'an - Pure Land Syncretism in China: With Special Reference to Yung-Ming Yen-Shou” in 1984.  She is the first Taiwanese Bhikshuni that has earned a doctoral degree in Buddhist Studies in America.

Before Master Heng-ch’ing became a nun, she was appointed to teach at the Department of English of Soochow University. After she earned her doctoral degree, she returned to Taiwan and started to teach at the Department of Philosophy of National Taiwan University.  She is the first Bhikshuni being appointed to teach at a national university in Taiwan.  From 1989 to 1992, she was engaged to be the first head of the Fa-kuang Institute of Buddhist Studies.  In 1994, she founded the Center of Buddhist Studies at National Taiwan University and established the Systemization of the Buddhist Document Database (URL:
buddhism.lib.ntu.edu.tw/BDLM/index.htm]).

In 1998, Heng-Ch’ing established in cooperation with Hui-min from the National Institute of Arts (Pan-ch’chiao, T’ai-peh, Taiwan) the Chinese Buddhist Electronic Text Association (CBETA, URL: buddhism.lib.ntu.edu.tw/BDLM/index.htm]) with funds from the Yin-Shun Foundation of North America and the Chung-Hwa Institute of Buddhist Studies (Taipei, Taiwan).  At present Heng-ch’ing is a member of the foundation’s standing committee.  She is also the author of many works, including “The Women Devoted to Buddha on the Path of Bodhi”, “Buddhist Thoughts”.