Abstract: A brief overview of the situation for nuns in the Tibetan Tradition

Historically the bhikshuni ordination was never formally introduced into Tibet presumably because there was never a quorum of 5 Indian bhikshunis who made the hazardous journey across the Himalayan range.

However nuns did receive the shramanerika or novice ordination and were treated with a certain respect within society. Traditionally nuns usually devoted themselves to meditation practice, ritual or often acted as servants for the lamas or their own family members.  Many nuns attained high levels of spiritual realisation but since they received little education they did not write books, teach extensively  and consequently had no voice. Of course even in Tibet there were isolated cases of highly educated nuns studying under a learned Lama, but it was not the norm. So one of the advances for nuns in exile has been the introduction of a study program on a par with that received by monks. The result is now emerging of well-educated and trained nuns who are becoming more confident and articulate.

However even modern nuns are still quite diffident and shy in the presence of male monastics, especially the Rinpoches and Geshes.  They will naturally not oppose any male authority figure.

The Lamas often discourage nuns from considering Bhikshuni ordination by assuring them that such an ordination is not necessary. In addition, they state, it would be extremely burdensome for the nuns to have to keep so many rules.  Their viewpoint is that education is sufficient to raise the status of nuns and they should be content with that.

In answer to the Lamas' position stated above intending to undermine the idea of bhikshuni ordination by saying that this ordination is not necessary or important, I say "Oh, so Rinpoche you are still a novice?" When he immediately insists that of course he is fully ordained, I reply that he had just stated that that ordination was not important, so why had he bothered?  The point about the rules being too heavy for the nuns to bear is usually countered by the observation that the nuns will surely be able to keep the rules at least as well as the monks are presently keeping theirs!

However this pervading attitude has to be faced. Let us consider a few points.

First of all, the Lord Buddha himself decreed the full ordination for nuns. He did not say that nuns should only receive a sramanerika ordination.  Whatever the controversy over his reasons for hesitating or the 8 Garudharmas, the bhikshunis were definitely bhikshunis, so we are merely following the Buddha's own intention.

For a country or nation to be considered as truly Buddhist, there must be the fourfold sangha of bhikshu, bhikshuni, upasaka, upasika.

In those countries such as China, Taiwan, Korea and Vietnam where the bhikshuni ordination is still extant the status of nuns is high and they receive the support and respect of society almost on a level with monks. They are brothers and sisters in the Dharma. However the vinaya makes it clear the monks always enjoy a higher status so there is no cause for monks to feel concerned.

How does this concern nuns in the Tibetan tradition? One point is the question of the Geshema or Khenmo degree.  Several Lamas of various traditions have stated to me that these degrees can only be given to one holding Full Ordination, since one of the subjects to be examined is the Vinaya which can only be studied by the ordained.  Even if a nun received permission to study the bhikshuni vinaya (which they read when reciting the Kangyur anyway) without having herself received the bhikshuni vows, there would probably exist the stigma that she was not really a geshema but only allowed the title out of consideration for her scholastic efforts.

Also since they do not have bhikshuni vows, Tibetan nuns cannot take part in the monastic ceremonies such as full sojong or ordination ceremonies. They are therefore barred from important aspects of their lives as monastics.

It is my understanding that only on the acceptance of a novice by 10 fully ordained monastics during the Bhikshuni ordination, does the person become a part of the actual monastic sangha. In other words, as long as one remains a sramanerika one is only on the doorstep so to speak, and has not yet entered into the temple of monastic sangha.  Why should a nun of 60 years ordination still be only a novice?

At our nunnery of Dongyu Gatsal Ling the nuns study philosophy with a Khenpo from the Dzongsar College and senior nuns from the Nyingma Nunnery of HH Penor Rinpoche. In addition they are instructed in ritual by senior monks of our affiliated monastery of Khampagar in nearby Tashi Jong. The nuns also learn English and perform a strict 2 month retreat every year.

Our aim is not only to produce philosophy teachers (Khenmo) but also to re-establish in India a rare lineage of yoginis or togdenma.  These nun yoginis, who follow the Milarepa tradition, dedicate their lives to meditation practice and hence can become masters and exemplars for others. There are few qualified women teachers of meditation in the Tibetan tradition although many female practitioners.

Several of the most senior lamas in my Drukpa Kagyu lineage, including His Holiness the Gyalwa Drukpa, suggest that the future of the tradition may lie with women who have such a high level of dedication and devotion. Therefore they are urging and themselves implementing an equality between the monks and the nuns.

So this is the time for nuns to cease to be merely tight little buds of unfulfilled aspirations and to fully blossom into their great intellectual and spiritual potential. 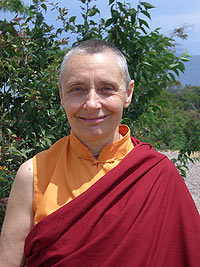 Tenzin Palmo grew up in London and felt the vocation for Buddhism at an early age. She went to India and was one of the first western women to be ordained a Tibetan nun. For several years she lived in an Himalayan monastery and then moved to a small cave where she remained for 12 years in order to work at her spiritual practice.

She was the subject of "Cave in the Snow" by Vicki Mackenzie, and author of  "Reflections on a Mountain Lake" and "Three Teachings".

In 2000 she started to build a Nunnery for Himalayan women in North India. Tenzin Palmo spends six months out of the year travelling the world to give talks which offer both Asian and western audiences an access to Tibetan Buddhism.

The Nunnery was named ‘Dongyu Gatsal Ling’ by the Spiritual Director His Eminence the 9th Khamtrul Rinpoche Shedrup Nyima. It means ‘Garden of the Authentic Lineage’ and was chosen because ‘Dongyu Nyima’ was the name of the previous Khamtrul Rinpoche, who was Tenzin Palmo’s personal Guru.

The emphasis of DGL Nunnery is to