Abstract: The Revival of a Dual Ordination for Korean Buddhist Nuns in the Modern Period

Religious Studies at University of Virginia

My paper is concerned with the historical reinstitution of a dual ordination for Buddhist nuns in Korea in 1982.  According to Kim Yŏngt’ae, there are no Korean historical records that indicate how a dual ordination for nuns was carried out in early Korean Buddhist history.  Yet Japanese records on the ordination of the first Japanese bhikshunis in the kingdom of Paekche show that an authentic Korean bhikshuni lineage had already been established in Korea by the sixth century and that a dual ordination was practiced for nuns as well.  Kim Yŏngmi believes that from the sixth century until the fourteenth century Korean nuns were ordained as bhikshunis under both sanghas.

Korean Buddhism, however, underwent tremendous persecution and also upheaval as Koreans adopted Neo-Confucianism as their state religion and ideology during the Chosŏn period (1392-1910).  So far as I have been able to research, there is no Korean record on the practice of a dual ordination for nuns during the Chosŏn period.  It seems that the practice of a dual ordination for Korean nuns discontinued sometime in the Chosŏn period.  I assume that Korean nuns were ordained as bhikshunis under bhikshu sangha alone.From 1910 to 1945, Korea was colonized by Japanese.  During the tumultuous years of Japanese colonial rule, Korean Buddhism severely suffered under the influences of Japanese Buddhism, which was distinctly different from the Korean tradition in its monastic practice.  After the liberation from Japanese, celibate Korean monks and nuns were anxious to restore their earlier tradition.  Yet three years of Korean War (1950-53) ravaged the entire Korean peninsula.  Due to the aftermaths of the war, Korean Buddhists took decades to recover from the devastating losses of their literary, architectural, and human resources.In June, 1982, the Council of the Korean Buddhist Chogye Order decided to reinstitute a dual ordination for nuns and hold the ceremony once a year.  In August, 1982, with the full support from the monk vinaya masters, such as Ch’aun and Ilt’a, Korean nuns held the First Korean Bhikshuni Congregation at Chin’gwansa Temple in Seoul in order to prepare for the revival of a dual ordination for nuns.  In October, 1982, three principal and seven witnessing bhikshuni masters were chosen by the First Korean Bhikshuni Congregation held the historic dual ordination for nuns at Pŏmŏ-sa Temple in Pusan.  Since then the Korean Buddhist Chogye Order has held a dual ordination for nuns once every year. 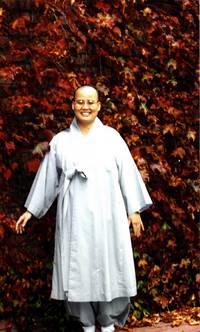 Inyoung Chung is a Korean Buddhist nun (Sukdham) and Ph.D. candidate in Religious Studies at the University of Virginia, U. S. A. She is working on her dissertation, “A Korean Buddhist Nun’s Life Story: A Family in the Footsteps of the Buddha.” Her M.A. thesis, “A Buddhist View of Women: A Comparative Study of the Rules for Bhiksunis and Bhiksus Based on the Chinese Prātimokṣa” is published in the Journal of Buddhist Ethics (Vol. 6, 1999, http://www.buddhistethics.org/6/chung991.html).

At the age of thirteen, she ran away from home to become a nun. She was ordained as a Bhiksuni in 1975.