As far back as 1987, H.H. the Dalai Lama had asked for an examination of the current Tibetan practice of non-ordination of nuns, as opposed to the times of the historical Buddha (around 500 B.C.) An extensive study has been worked out by the Tibetan Department of Religion and Culture (DRC), Dharamsala (India), and during the Dalai Lama’s visit to Zurich he mentioned on June 28, 2005: “Although there has previously been discussion regarding the Bhikshuni ordination no decision has been reached. However we need to bring this to a conclusion. We Tibetans alone can’t decide this. Rather, it should be decided in collaboration with Buddhists from all over the world. Speaking in general terms, were the Buddha to come to this 21st century world, seeing the actual situation in the world now, he might have changed the rules somewhat…”

The International Congress to be held in Hamburg will lead to the requested decision or at least a supportive declaration in collaboration with worldwide expert researchers in the fields of Vinaya, religious precepts and their transmission lineages during the history of Buddhism. They are coming from countries like Thailand, Korea, Sri Lanka, and Myanmar, but also from the United States, India, Vietnam, Australia, and Germany. They are going to present their papers to an audience of about 150 experts and other interested participants, i.e. representatives of Buddhist Centers of various traditions and academics of various fields of studies. The congress is supposed to be concluded by a declaration of H.H. the 14th Dalai Lama, explaining the re-establishment of the full ordination of bhikshunis within the Tibetan tradition of Buddhism. At the same time the inclusion of Buddhists of all traditions in the international congress in Hamburg aims at a world-wide consensus on the re-establishment of the Bhikshuni-ordination.

The congress will assemble internationally recognized scholars in the field of Buddhist studies specializing in monastic discipline and history. Scholars will present papers relevant to the current debate on the status of ordained women, presenting research based on Buddhist texts and contemporary practice traditions in China, Korea, Taiwan, Tibet, and South Asia.

Among the specific topics to be addressed are:

Because gender discrimination conflicts with the ethic of social and spiritual equality maintained in Buddhist theory, the issue of full ordination for women has become a major concern in the contemporary international Buddhist diaspora.

At this congress scholars are invited to present papers approaching the topic from textual, philosophical, sociological, and feminist perspectives. One objective will be to discuss the opportunities Buddhism theoretically offers women for spiritual and social advancement and how the theoretical equality of women contrasts with women’s actual opportunities for education, training, and religious and social advancement in Buddhist societies. Another objective will be to assess the prospects for reintroducing full ordination for women in those Buddhist traditions where it is not currently available.

The aim of this congress is to present current research by Vinaya scholars on pertinent topics, including:

The congress will also aim to analyse the legal status of ordained Buddhist women and the procedures used to ordain them. Discussions will include an analysis of the advantages of establishing a Bhikshuni Sangha for preserving Buddhist cultural institutions.

Ultimately, the goal is to elicit a statement from His Holiness the Dalai Lama declaring that and how the Bhikshuni lineage will be established in the Tibetan tradition.

The proceedings of the congress will be published in book form. Film and sound recording will be available (DVD/CD) by the end of the event. 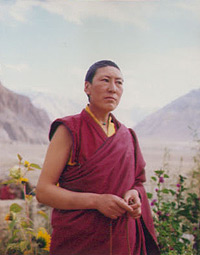