The Venerable Sayadaw Ashin Nyanissara was born on February23, 1937, in the town of Thegon, Pegu Division, in central Myanmar.

At the age of seven he went to the local monastery to study. There he learned his education and Buddhist scriptures. At the age of fifteen he was ordained as a samanera (novice) and he later received his higher ordination as a Buddhist monk at the age of twenty in Thegon.

He passed his primary, middle and higher examinations respectively in Pali Buddhist scripture in the years 1956, 1957 and 1958. He earned a master's degree in Buddhist Doctrine at Khin-ma-gan Pali University in Mandalay. He then completed a diploma course in foreign language (English) at the Sangha University in Yangon, for the propagation of Buddhism.

In 1965, he founded BBM College in the town of Lay-Myet-Hna in the delta region of Lower Myanmar, and worked as the headmaster and chief administrator of that institution until 1968. In 1968, he moved his residence to Sagaing Hills in Upper Myanmar and began to teach Buddhist scriptures to the monks, nuns and novices. He also continued his study of English, as well as trained in Buddhist homiletics under the guidance of Venerable Ashin Pandita (Aggamahaandita) Anisakhan Saydaw for the purpose of preaching to lay Myanmar Buddhists. He remained in Sagaing Hills until 1975.

Between the years 1975-78, he lived in seclusion and practised meditation at the forest monastery of Thabaik Aing Taw-ya in Mon State Lower Myanmar. In 1979, he established his own monastery, Sitagu Vihara in Sagaing Hills, and resumed teaching the Buddhist doctrine and scripture to the monks, nuns and novices of the surrounding region.

In 1981, he began collecting donations for the construction of a water supply system that would eventually provide clean drinking water to over eight hundred monasteries and eight thousand residents of Sagaing Hills.

In 1987, he began the construction of a one hundred bed hospital for the monks, nuns, novices and poor people of Sagaing. The hospital is fully equipped with surgical and X-ray units, an optical surgical unit, an inpatient ward and outpatient ward, and has a permanent staff of doctors, nurses and non-professional workers.

In 1994, he began the construction of the International Buddhist Academy, its goal is to teach and train missionary student monks and nuns in the hopes of further spreading the Buddha's teachings. The Academy is currently under construction in Sagaing Hills, Myanmar.

Besides being a teacher of Buddhism and organising and administering various charitable projects in Myanmar over the years; he has published thirty-eight books and articles in the Myanmar language, since 1979, on the subject of Buddhism. He has published five booklets in English and is currently working on several more manuscripts for English publication. 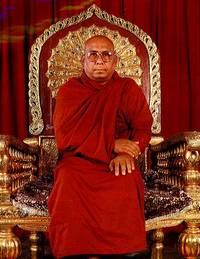