Abstract: On the History of Buddhist Nun Order in Vietnam

by Prof. Dr. Le Manh That

Buddhist Nun Order started in Vietnam quite early, at least from 2nd century A.D. with Man Nương (ca.175-255). She was born in a devout Buddhist family in the Bắc Ninh Province. When the Indian monk Ksudra by name came to Luy Lâu at about 189 A.D., she went to work with him and later on, became a nun. From then on, almost nothing is known about the Nun Order, until the appearance of Zen master Diệu Nhân (1042-1113) recorded in the Thiền uyển tập anh (Eminent Figures in the Zen Garden) written in 1134. Diệu Nhân came from the imperial family of Lý Dynasty of Vietnam. She got married and when her husband died, she decided to become a nun and later on headed the Hương Hải Zen Monastery. Her lineage is almost lost. Only one poem written at her dead-bed is left.

Passing over to the 13th and 14th century, we have the names of a number of imperial members of Trần Dynasty who were ordained to become Buddhist nuns, but we know almost nothing about their Buddhist activities.

With the arrival of the 15th and 16th century, we again have the names of a number of Bhiksuni who contributed to the construction of a few Buddhist temples in North Vietnam. And their social origin is again mostly from royal or official class.

At the first half of the 17th century, we again have a cluster of Buddhist Nuns who devoted to the work of erection the famous Bút Tháp temple in Bắc Ninh province, and one of them became an abbess of this temple, i.e., Diệu Tuệ (1615-1680). Again, Diệu Tuệ came from the imperial family of Lê Dynasty with the name Lê Thị Ngọc Duyên. When she grew up, she got married to a man who died at an early age. She decided to become a nun with the acquiescence of her Queen mother Trình Thị Ngọc Trúc.

In the 18th century, it seems that there is a great community of Buddhist Nuns in Vietnam. Their names are mostly known through the contributions they made to the construction of temples or printing of Buddhist works, such as the nun Diệu Liên who managed the edition and printing of the Thiền tông bản hạnh (Hagiography of the Zen lineage) of her master Chân Nguyên (1647-1726) in 1747. The special feature of this period is the codification of the rules and regulations of the Nun Ordination through the work of Pháp Chuyên Luật Truyền (1726-1798).

The famous nun of the 19th century is of course Emperor Gia Long's (1802-1820) sister who is known under the name Bhiksuni Vân Dương.  When the Nguyễn House was overthrown in 1772 in Huế and her brother Gia Long had to flee South, she remained in Huế, decided to become a nun and lived at the temple of the Vân Dương village. So, she had the name Bhiksuni Vân Dương. She also played an important role in the struggle of Gia Long against the Tây Sơn Dynasty. A few decades after Gia Long won the battle and become the Emperor of a unified Vietnam, she died and remained a nun.

In the 20th century, with the modernization movement of Vietnamese Buddhism, again most of the eminent figures of Buddhist Nuns are from royal and official families. They engaged mainly in education and charity works, and some of them published books and poems such as Diệu Không (1905-1997) and Trí Hải (1937-2003).

Through the history of Buddhist Nun Order in Vietnam, we notice a special trait about the social origin of this order from the early beginning down to the present time. That is, most of them are from the upper class of the society and most of them already had a family life before becoming nuns. 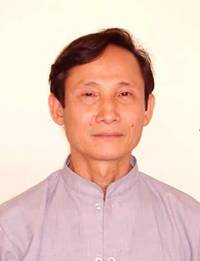