Abstract: Experiences with Ordaining Bhikshunis in Los Angeles from 1994 to 2004

I am not an expert on the Vinaya, although I have read it several times and I think I know it well enough to know the arguments for and against bhikkhuni ordinations. But I was not invited as an expert, but rather as someone who has been intimately involved in helping women take bhikkhuni ordination for the past twelve years. And I am going to tell you the story about how that came about.

I was the first American woman to take full bhikkhuni vows in the United States. In 1976 my master ordained me with the permission of bhikkhunis from Fo Gwang Shan, Taiwan. After his death in 1980, I became the abbess of International Buddhist Meditation Center, a  position which I still hold today.

In 1994 I had a group of students who had been studying with me for a number of years, in preparation for final ordination as monks and nuns. I had already given them novice ordination and they were ready for the final step.

So, I went to Ven. Havanpola Ratanasara, the elder Singhalese monk, with whom I had been teaching courses at the College of Buddhist Studies, Los Angeles. He was higly regarded in the Theravadan community. So one morning in February, I approached him in his office and told him that I had a group of students who were ready to take final ordination. I asked him if he would act as the uppajhaya in December at a grand ordination ceremony. He said the would be happy to do so. Then, with great trepidation, I said, “There is only one thimg though, Bhante. My students feel that since I am their teacher, I should ordain them,.”

He replied, “Let me think about this.” Five minutes later, he said, “Karuna, since I am the Upppajhaya, the main duty I have is to make sure that the person leading the ceremony is qualified. And I appont you.” I replied, “Thank yiou very much,. Bhante. I accept your generous offer.

That night I thought about Bhante Ratanasara’s offer to me. The next morning, I went downstairs to his office and told him, “Bhante, I am grateful that you apponted me to lead the ordination ceremony. But I do not think I should do it alone. Why don’t we share the role of the Ordaining master? Bhante thought it was a good idea, so we sat down together to split the ceremony in half. We used the same ceremony that Thich Man-Giac had translated into English twelve years earlier when we ordained the last of Dr. Thien-An’s students who had not yet been ordained as bhikkhus. At that time I played the role of the representative for the monks and nuns.

Bhante Ratanasara and I had several discussions about bhikkhunis and whether or not it was good to open up the ceremony for women other than my own students. We agreed that we should open it up to women who were good candidates, but who did not have the opportunity to ordain. I trusted Bhante’s view points, because I knew that he was well schooled in Vinaya matters, We looked at all the exceptions that the Buddha had laid down regarding ordination for both men and women.

We divided the Uppajhaya’s role in two, assigning Bhante to read half of it and for me to read the olther half. We did the same for the vice uppajhaya and the Vinaya Master, thereby, doubling the number of the ordination masters: one male and one female for each role. The next step we took was to write all of the Buddhist masters living in the Los Angeles area, who had been ordained more than ten years. In the letter I explained what we were doing and asked for their response: either I approve what you are doing and will be happy to participate; I am sorry, but I have another commitment; and I do not approve. All of the answers that returned were either the first or second option. No one returned a negative answer. Then I visited the people that I thought would agree to be one of the six ordaining masters. The stipulation that I lay down was that they were to have received their bhikkhu/bhikkuni ordination at least 15 years ago and that they were in good stead in the community.

I came up with very good people for each of the positions: another Sri Lankan monk,
(because the Thai monk we had originally selected had to be in Thailand on that date) and a Chinese monk; a Vietnamese and a Korean nun. And of course, Bhante Ratanasara, who was the second Singhalese and myself as an American. Then our planning started in earnest. Unfortunately in April, I had a serious stroke and a lot of the hands-on planning was left to my eldest daughter who was working for the center then.(I had been married for ten years before I started my Buddhist studies in earnest. But since we had discussed several times what was going to happen, she did a beautiful job of executing the plans while I was in an Aryavedic Buddhist Hospital near Colombo.

When the day of the ordination came along, we had, besides the six ordaining masters, another thirty witness masters, all ordained for at least ten years. And they came from all Buddhist countries and traditions. We had Sri Lankan and Thai bhikkhus, and bhikkhus and bhikkhunis from China, Japan, Korea, Tibet, Vietnam, Europe and the United States.

In the letter I had sent to the masters, I invited them to have any students that they wanted ordained, to participate in the ceremony. So, we had quite a few more than just my students. We had several Vietnamese and Western Tibetan men and women.

Then three years later we prerformed a small grand ordination: this time ordaining  two Theravadan women as bhikkhunis, one Nepalese, the other  Sri Lankan, and several American Tibetan practitioners and an American woman in the Korean tradition. We also ordained several American sramaneras/sramanerikas.

In 2004 we held our next large Grand Ordination.  It came about because one of IBMC’s residents was a Tibetan practitioner. She has been ordained as a novice several years earlier and she asked me to ordain her as a bhikkhuni.

I told her, “That is impossible. First, I cannot do it for just one nun. The second reason is that it will cost us a minimum of $10,000, which the Center cannot afford.” But she asked me several more times. I knew that she was sincere and would make a good Bhikkhuni. She said, “What if I find a group of another 20 women who want to become Bhikkhunis? I told her, “All. right.” So Rev.Chitta went to work, writing to several American Tibetan women that she knew. She also posted a notice on the internet about the possible ordination. Soon, applicants from around the world wrote her and asked if I would ordain them as Bhikkhunis. I relented, making up a letter to be given to each of their masters, explaining that they would have to agree to train their student for another five years after her final ordination.  Armed with letters from their masters, I went through each one to determine if she were a fit candidate, Altogether we had 25 women, most of them from the Tibetan tradition as bhikkhuni candidates. They came from around the globe: from France, Spain, Germany, Switzerland,  Australia, and both coasts of Canada and  as well as Americans from Arizona, New York, Maryland, Florida, and California.

We also ordained a Theravadan woman from Germany as a bhikkhuni and a Theravadan from Spain as a novice. But we also had men who were ordained as sramaneras and bhikkhus. In addition, we ordained both men and women as Zen Dharma teachers. These people received the same training as the bhikkhu/ bhikkhuni candidates had, but differed because they were either married or working outside of the temple.

All candidates were required to stay at the center for two weeks, preparing for their ordination. They were kept quite busy from 6 am to 10 pm every day, studying the vinaya, as well as sharing their particular chanting and service styles with the others.

We did not ordain them into a particular school.  At the ordination they took on the robes of their particular tradition and the name that their own teacher gave them. We just admitted them to the Order, with the understanding that their own teachers were still their masters and that they were to remain true to their own tradition. The women werre so excited by the ordination that they have asked me to give another one in ten more years, so that they can particupate as masters. So, for right now, that is our plan. 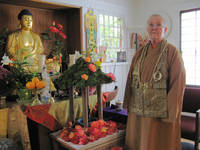 Ven. Dr. Karuna Dharma holds a B.A. degree in English from UCLA, She holds a M.A. degree in Secondary Education from California State University at Long Beach and a M.A. in Comparative Religions and a Doctor of Dharma in Buddhist Studies from University of Oriental Studies, Los Angeles.

1969 She began to study Buddhiam with her teacher Thich Thien-An. She helped Ven. Dr. Thich Thien-An establish the International Buddhist Meditation Center; Chua Vietnam in Los Angeles, the first Vietnamese temple in the U.S.; and the College of Oriental Studies, which later became the University of Oriental Studies. She is a past president of the American Buddhist Congress, serves as vice-president of the Buddhist Sangha Council and College of Buddhist Studies and was a founding president of Sakyadhita, the International Association of Buddhist Women. She is an original founding member of the Buddhist-Catholic Dialogue in Los Angeles and represented the Buddhists in presenting gifts to His Holiness Pope John Paul II on his trip to Los Angeles in 1987.

In 1973 she became a Buddhist atthangha sila. In 1975 she spent her weekends at Camp Pendleton as a Buddhist chaplain to Vietnamese refugees and took full Ordination in 1976, becoming the first women to be ordained traditionally in the U.S.

Since Dr. Thien-An's death in 1980 she has been the Abbess of the International Buddhist Meditation Center. She oversees the running of the Center, performs ceremonies, teaches, and is involved in Interfaith work and InterBuddhist work and has been active in the Interreligious Council of Southern California.

Ven. Karuna is profiled in, "Meetings with Remarkable Women: Buddhist Teachers in America," by Lenore Friedman. And contributed a chapter to a recent book edited by Karma Lekshe Tsomo, "Buddhism through American Women's Eyes." She edited "Zen Philosophy, Zen Practice," by Thich Thien-An and co-wrote the booklet "An Early Journey: Buddhist-Catholic Dialogue," with Dr, Michael Kerze. Rev. Karuna coauthored Buddhist Concept of Mind with Dr. Havanpola Ratanasara, as yet unpublished and edited Buddhist Concepts by American Disciples, contributing many of her own writings.

She is an active member of the Buddhist community in Los Angeles. She played an important part in the first Grand Ordination to be given completely in English with Ven. Thich Man-Giac presiding in 1981. In 1994 she and Ven. Dr. Ratanasara presided over the first Grand Ordination, with both bhiksus and bhiksunis, giving ordination on all levels, ordaining in all three traditions: Theravada, Mahayana, Vajrayana. In 1997 she gave her second Grand Ordination, again sharing the role of Uppajaya with the Ven. Dr. Havanpola Ratanasara.In 2004 Ven. Karuna Dharma and the IBMC hosted the third Grand Ordination of Western Bhikkhunis and Bhikkhus, with nuns who flew in from around the world.